If alcohol is bad, why did Jesus made good wine? 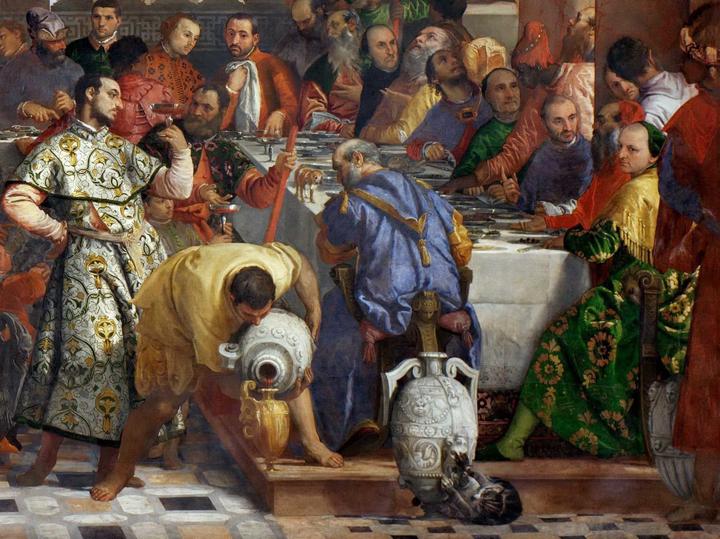 Some of you may think, if the Lord God only had not made that mistake in making wine at the marriage in Cana of Galilee! Did you ever find that Jesus Christ had made a mistake anywhere? The following is from “A Marriage and a Miracle” - an exposition of the Marriage of Cana.

“And when they wanted wine the mother of Jesus saith unto Him, “They have no wine.” Jesus saith unto her, “Woman, what have I to do with thee? Mine hour is not yet come.” His mother saith unto the servants, “Whatsoever He saith unto you, do it.” And there were set there six water pots of stone, after the manner of the purifying of the Jews, containing two or three firkins apiece. Jesus saith unto them, “Fill the water pots with water,” and they filled them up to the brim. And He saith unto them, “Draw out now, and bear unto the governor of the feast,” and they bare it. When the ruler of the feast had tasted the water that was made wine, and knew not whence it was (but the servants which drew the water knew); the governor of the feast called the bridegroom; and saith unto him, “Every man at the beginning doth set forth good wine; and when men have well drunk, then that which is worse; but thou hast kept the good wine until now.” This beginning of miracles did Jesus in Cana of Galilee, and manifested forth His glory; and His disciples believed on Him.”

We have here a lesson that you very seldom hear a sermon preached on, for some reason. It gives a great many people trouble. I have met professed Christians who have said: “I wish that lesson were not in the Bible,” and I have met other people who do not know anything else in the Bible except this lesson, and they are so glad it is here. I have before me in my mind this morning two classes of people who need a little instruction: (1) The fanatical prohibitionist; (2) The saloonkeeper. The saloonkeeper, if he does not know another passage in the Bible, knows this one; and the prohibitionist, if he could just get rid of this chapter, would be in glory.

Dear friends, I have always found that the Lord God is safer than any man, and for my part I love this chapter just as much as I love any chapter in the Bible, and I hold it up this morning between these two classes of people, and may God help us to the real truth. I maintain: 1 Jesus made good wine. 2 Jesus made plenty of wine. 3 Jesus made the wine useful.

This is the plain teaching of God’s Word. He made good wine. Prohibitionists, let me speak to you a few moments now. He did not make raisin tea. In some places in this country at present ministers of the Gospel have taken raisins and poured water over them to give the holy communion, because they have fallen out with Jesus Christ. A certain doctor of divinity in Brooklyn, in 1887, made the statement that if Jesus Christ drank wine he would not receive Him as a member in his church, and yet Jesus Christ tells us Himself that He did drink wine. The consequence is that some people have become so fanatical that instead of giving the wine in the holy communion, as I said a moment ago, they are giving raisin tea. A minister in Jelloway, not very far from here, fifteen years ago, became so fanatical that he gave milk at the Lord’s Supper instead of wine. My friends, I would rather be a blasphemer like Ingersol, than to mutilate the Word of God as those people did.

I would say furthermore, prohibitionists, that the Lord God not only made good wine, but He did not make “Damnation.” We have a certain class of people who look upon wine and say that that is damnation itself, yet the Lord Jesus Christ, the night when He instituted His Supper, took wine and blessed it, and gave it to His disciples, and said, “Drink ye all of it; for this is My blood of the New Testament, which is shed for many for the remission of sins.” Do you mean to say to me that the Lord Jesus Christ took some damnation and blessed it? Did He take damnation and give it to His disciples in the Holy Supper? Is it not time, my dear friends, that we stand by the Lord God instead of by fanatics?

I would go a little further, prohibitionists, and say He did not make a mistake. Some of you may think, if the Lord God only had not made that mistake in making wine at the marriage in Cana of Galilee! Did you ever find that Jesus Christ had made a mistake anywhere? He knew what kind of people would live in the nineteenth and twentieth centuries. He knew what He would have to write down in the Word of God in order that they who wanted the real truth might find it, and I thank my God just as much for this chapter as for the one wherein He instituted the Lord’s Supper – I thank Him just as much for this chapter as I do for the one wherein He describes the Holy Pentecost; the one is just as sacred and good as the other. Jesus made no mistake.

– Long, S.P. The great gospel; an address to theological graduates, lectures on the gospels for the church year, and “that remarkable lodge sermon." Lutheran Book Concern, Columbus, OH, 1904. Lutheran Library edition to be released in 2018.

Image detail: The Wedding Feast at Cana (1563), by Paolo Veronese.