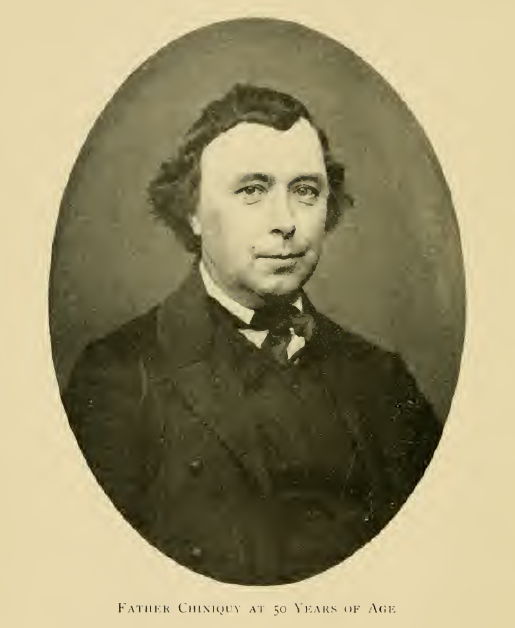 “Shall I tell it again? Yes! The devil had really taken possession of my heart. I was breathing nothing but hatred, vengeance and death against those defenseless and humble ministers of the Gospel. My hope was that I would make the ground so hot under their feet, in that parish and everywhere in Canada, that they could not dwell any longer in our land.

“The last address was hardly finished the third day, when I saw five or six of those humble and zealous ministers of the Gospel, or colporteurs, who had patiently and bravely attended all my meetings, with their Bibles in their hands, coming to meet and challenge me to have a discussion with them, promising to refute me before my people.

“I was overjoyed when I heard them challenging me to a public discussion. It was just the trap in which my hope was that they would fall.

“Instead of accepting their challenge, I turned towards the multitude, that had just come out of the church, — and I said: “Do you not see those miserable heretics, who come to challenge and insult you and me, at the very door of your church? Why do you not give them a lesson which they will never forget?”

“A thought had evidently come from hell into my heart, in that hour, the darkest of my life.

“I do not like to confess it, but I must. The intelligent reader understands that my intention was to have them so cruelly beaten, that they would either die there, on the spot, or be so cruelly treated that they would run away from the place, never to come again.

“My cruel and cowardly intention was so well understood by the multitude that the words had hardly fallen from my lips, when forty or fifty young men, like furious tigers, threw themselves on those few defenseless men, and struck them without mercy.

“In a moment their clothes were torn into rags, and their bruised and bleeding bodies were rolling in the snow, which was two or three feet deep on the ground. Very soon the snow was reddened with the blood of several of them.

“With a word of my lips or a movement of my finger I could have put a stop to that horror.

“But, alas, I was a true, a devoted priest of Rome!

“The blood of those heretics was the most pleasant thing I had ever seen!

“I was saying to myself, “Surely if they are not killed they will run away, never to come again!” Very probably they would have been killed there, if the God of the Gospel had not come to the help of His heroic messengers.

“A noble Roman Catholic French Canadian farmer, moved with compassion at the horrible spectacle which was before his eyes, cried out, “It is a shame to beat so cruelly defenseless men — I cannot bear that.”

“Then quick as lightning, throwing his coat and overcoat on the snow, he struck the nearest of the would-be murderers with his terrible fist, and sent him rolling down bleeding in the snow.

“In less time than I can say it, he had applied his terrible fist on the bleeding noses or the blackened eyes of half a dozen of his cruel and mistaken Roman Catholic countrymen. And who will not praise the Lord with me, today, when I say that this heroic action was applauded by most of the people? The wounded and bleeding, but heroic, servants of Christ were at once left free to pick up their ragged clothing and run back as fast as possible to their lodgings.

“Then, falling on their knees (as I learned ten years later from their own lips), they raised their supplicating hands to the Mercy Seat, and said to the dear Saviour as much with their blood as with their lips, “Dear Saviour, Thou seest our bruised bodies and bleeding wounds, and Thou knowest the one who has caused us to suffer as we do. We beseech Thee, look down on him in Thy mercy. Show him the error of his ways. Give him the saving light of the Gospel, that he may know and love Thee as his only Saviour; change that stone of the wilderness into a child of Abraham. Grant him to see the ignominious chains which tie him to the feet of the idols of Rome, that he may come with us to invite his poor Canadian countrymen to accept Thee as their only hope and Saviour for time and eternity.”

“And, blessed be the Lord, the prayers of those modern and heroic martyrs were heard at the Mercy Seat.

“There has never been any doubt in my mind about the fact that, in the admirable providence of God, I owe my conversion to the fervent prayers of these six humble but admirable Christians, who had been so cruelly beaten at my instigation in January, 1850, at the door of the Church of Pointe aux Trembles.