Why I stopped reading tarot cards 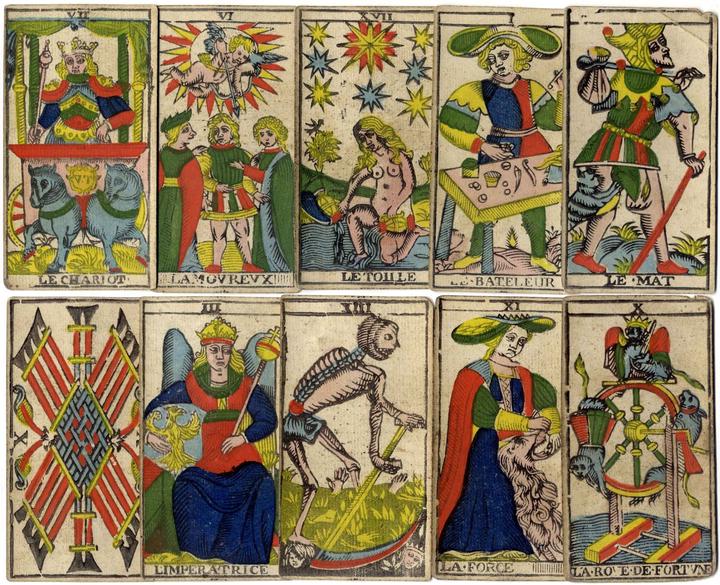 Tarot was an important part of my life for almost 20 years. I studied it, wrote about it, performed countless readings, and was considered knowledgeable by experts. Here’s why I stopped.

Matt writes, Alec, could you tell me why you took down your tarot site?

You may have found this post by looking for one of the popular tarot articles. Or you may be a long-time friend who’s curious as to what happened to tarot.alecsatin.com. What follows is as clear and honest an explanation as I can provide. Please consider it in the manner in which it is provided.

Tarot was an important part of my life for almost 20 years. I studied it, wrote about it, performed countless readings, and was considered knowledgeable by experts in the field. I chose to stop practicing tarot a few years ago, and have had no regrets. Here are my reasons why.

For the response to Jill See Side Effects of Tarot Reading

When someone speaks of tarot, they are talking about the 78 card tarot deck which appeared five centuries ago in central Europe. There are two parts to a tarot deck. The trumps, or major arcana, are numbered 0 to 21. Each is associated with a particular figure. The minor arcana is divided into four suits - Cups, Wands, Swords and Coins. Each of the suits consists of four court cards - a Page, Knight, Queen, King - and pips numbered 1 to 10. In the Tarot of Marseilles and tarot decks used to play the game of tarot, the pips resemble poker cards. In the Rider-Waite tarot, Thoth and other decks intended for divination (reading), all 78 cards have distinct images.

In my experience tarot reading by a sincere practitioner is effective. It’s not a sham nor joke. It works.

Yes, the field of tarot does contain schemers who use tarot cards to rob, cheat and deceive. On the other extreme are tarot dabblers who use the cards as entertaining distraction. But the majority of tarot people I know are serious artists, therapists and craftsmen. They love tarot, enjoy what they are doing and believe it a positive thing for them and the people they work with. They’re the real deal.

What happens in a tarot reading

Most tarot readings start with a question or area of focus such as career or relationship. The question can be as simple as Tell me what I need to know right now. The person asking the question is the querent. The person reading the cards is the reader. They can be the same person.

The reader shuffles and deals the cards in a particular way. Sometimes ritual is involved, such as asking the querent to shuffle or touch the cards. The reader interprets the spread and answers any questions the querent may have. Sometimes more cards are pulled, or an entirely new spread laid.

People who are not familiar with tarot reading consider it all fortune-telling. This is inaccurate. Some very good readers use tarot as a diagnostic tool. Using tarot in this way they cut quickly through to the details and dynamics of a client’s life. When done well, the client need say little or nothing at all.

A kind of dependency

Midway in my tarot reading experience I realized that a percentage of people who came to me were not interested in spiritual awakening or personal growth, the two big social buzzwords at the time. Rather they wanted someone else to take responsibility for the decisions they needed to make in their lives. Tell me what to do, they said. Getting guidance from another is often helpful. But you have to choose your own actions. And you are responsible for what you do. If you’ve ever found yourself in the position of having to lean on someone else to make a decision, you’ll understand how weak such dependency leaves you. Using tarot as a crutch is more common than is generally acknowledged. Readers can fall into this just as easily as querents.

Divination is any means used to communicate with God. Records of divination trace back to the earliest recorded history. Except for the Bridge-like game played in some parts of Europe, tarot is a modern form of divination. 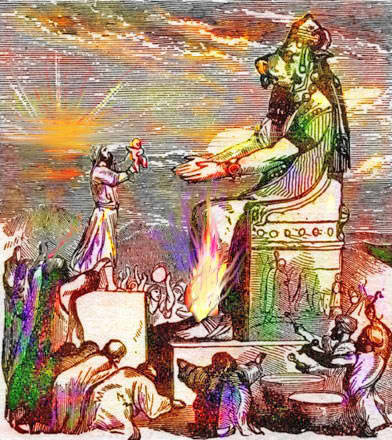 Sacrifice of a child to the false god Molech.

Ancient forms of divination were brutal and disgusting. Animals were cut open and guts read. Bones of dead humans and animals were thrown and interpreted. Most horrible of all, young children were thrown into fires and burned alive. This has everything to do with modern tarot, no matter how reprehensible these other forms of divination seem to us today. The intent has infinitely more weight and importance than the form. 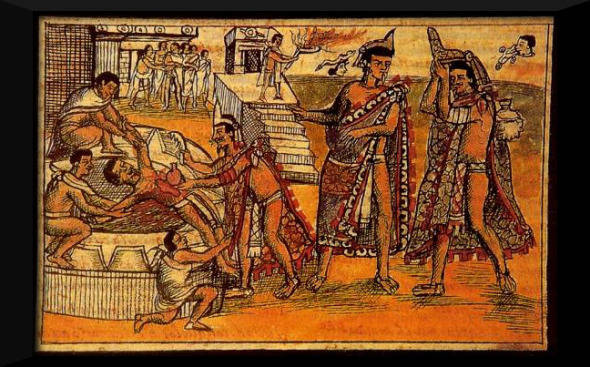 Child sacrifice as a form of divination.

How tarot readers believe it works

Anyone more than a tarot dilettante has some idea of how tarot works. She might think that a spirit entity is working through the cards. Or, he might believe that reading is an intuitive or empathic ability intrinsic to human beings. Some believe God is present in the readings. But probably no tarot readers are under the impression that they are being used.

Those who read for others, and those who have cards read for them are often trusting people. They are usually comfortable with experimentation, with the idea of all things in moderation, and are convinced that they are smart enough, canny enough, and sophisticated enough to see through any dangers or pitfalls.

I used to believe this too. How naive I was!

If you believe there’s a modality behind the cards which provides the information of the reading, how do you know the source is trustworthy? Do you take it on faith? Is the proof in the pudding? Do the results justify the means?

Probably you just don’t worry about it.

Some years ago I knew a man who belonged to an exclusive country club. Over time he got to be friendly with a member who owned several successful businesses. This friend provided my colleague with lucrative stock tips. One day this member let it be known that he had been appointed to the board of a newly-chartered investment bank. The person I knew invested $75,000. Many others invested $50,000, $100,000 or more. One day the board member, the bank and all the money just flew away, never to be seen or heard of again. That’s called the long con.

The long con works because the grifter takes years to establish his trustworthiness and utter reliability. The end of the trap is utterly predictable and usually inescapable. You just can’t believe that this friend which has always been so good to you is really a liar and a cheat.

I have to tell you. Tarot is the tool. You are the mark.

You’re probably ready to throw me out as a crackpot. That’s how I used to think about people who were against tarot. I was wrong. You may be too.

Just because someone says you’re being fooled when you know you’re not doesn’t make the other person wrong. They may just have more information than you.

The spirit behind the cards hates you

With few exceptions, tarot people are thoughtful, caring and sensitive. They’re not the kind of people who think of themselves as hated - except by the narrow-minded.

You may need to expand your view a bit.

You actually do have a powerful enemy who hates you personally. He’s a lot more clever than you think, and is more than willing to present himself as a friend if that suits his purpose.

There is also a God who is personal and knowable. That same God created you as unique, special and eternal, and to have a relationship with Him.

There is only one God in the entire universe.

He has no part in tarot reading, and has warned against it (Leviticus 20:6).

Therefore what you are experiencing in your readings does not come from God. Tarot reading must deceive you in some way, even if that deception is only to keep you trusting in the idea that tarot is a force for good.

Divination separates you from the divine

Regard not them that have familiar spirits, neither seek after wizards, to be defiled by them: I am the LORD your God. Leviticus 19.31

When thou art come into the land which the LORD thy God giveth thee, thou shalt not learn to do after the abominations of those nations. There shall not be found among you any one that maketh his son or his daughter to pass through the fire, or that useth divination, or an observer of times, or an enchanter, or a witch, Or a charmer, or a consulter with familiar spirits, or a wizard, or a necromancer. For all that do these things are an abomination unto the LORD. Deuteronomy 18.9-12

So Saul died for his transgression which he committed against the LORD, even against the word of the LORD, which he kept not, and also for asking counsel of one that had a familiar spirit, to enquire of it; And enquired not of the LORD: therefore he slew him, and turned the kingdom unto David the son of Jesse. 1 Chronicles 10.13

Why I no longer read tarot cards

When I used to read tarot cards, I thought they were a powerful tool to help ease suffering. People told me how much their readings helped them. And more often than not, those readings did help them temporarily.

Yet, as James said, What is your life? It is even a vapor, that appeareth for a little time, and then vanisheth away. (James 4:14). How many people in your life have already died? I’ve lost too many. And how many more will die? You know the answer to that one.

What if there is no reincarnation? What if instead this is true: It is appointed unto men once to die, but after this the judgment? (Hebrews 9:27) You are an eternal being who will live after your physical death. Now’s the time to prepare for what comes next with as much carefulness and sincerity as you are capable. The stakes are high, no matter how it may seem.

For those who come to God must believe that he is and that he is a rewarder of them that diligently seek him. -Hebrews 11.6

Seek Him while He may be found and call upon him while He is near. -Isaiah 55.6