The good example of John Huss 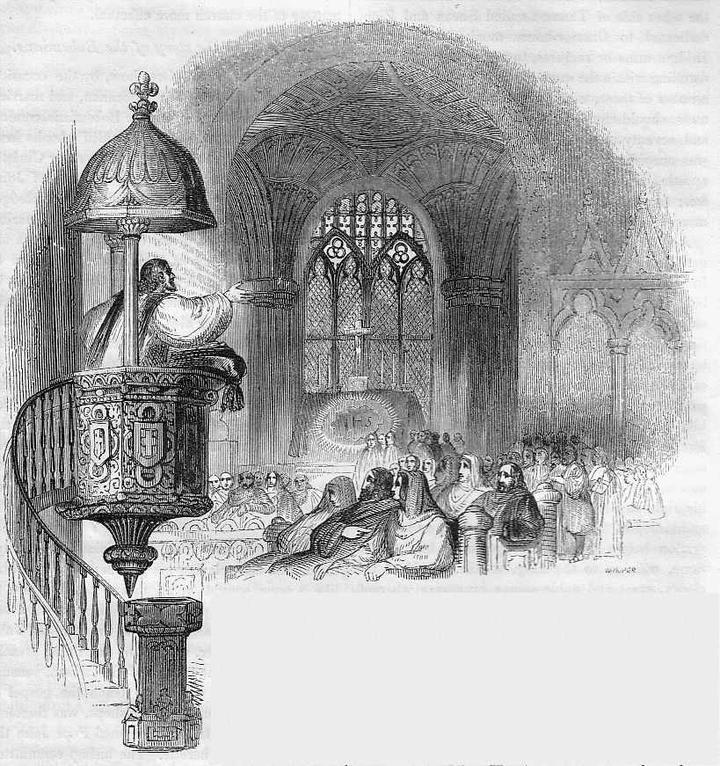 “During all his life, Huss distinguished himself by constant application to duty and tireless devotion to preaching according to the Scriptures. His conduct has been termed exemplary, his life blameless, and his personality winning. Even his enemies did not attack his character during his life nor after his death.”

The following account of the life of John Huss is from Heroes Of The Reformation by Gideon & Hilda Hagstotz.

A masterful preacher and lover of the gospel

“John Huss was born about 1373 of peasant parents at Husinec, near the Bavarian frontier…In 1393 he received the bachelor of arts degree, the next year he became a bachelor of theology, and two years later the University of Prague conferred the master of arts degree upon him…By 1401 he accepted the deanship of the philosophical faculty, and the following year he rose to be rector of the university. With this recognition of ability also came the appointment as preacher of Bethlehem Chapel. This house of worship had been built and dedicated to the specific purpose of preaching to the citizens of Prague in their native tongue. 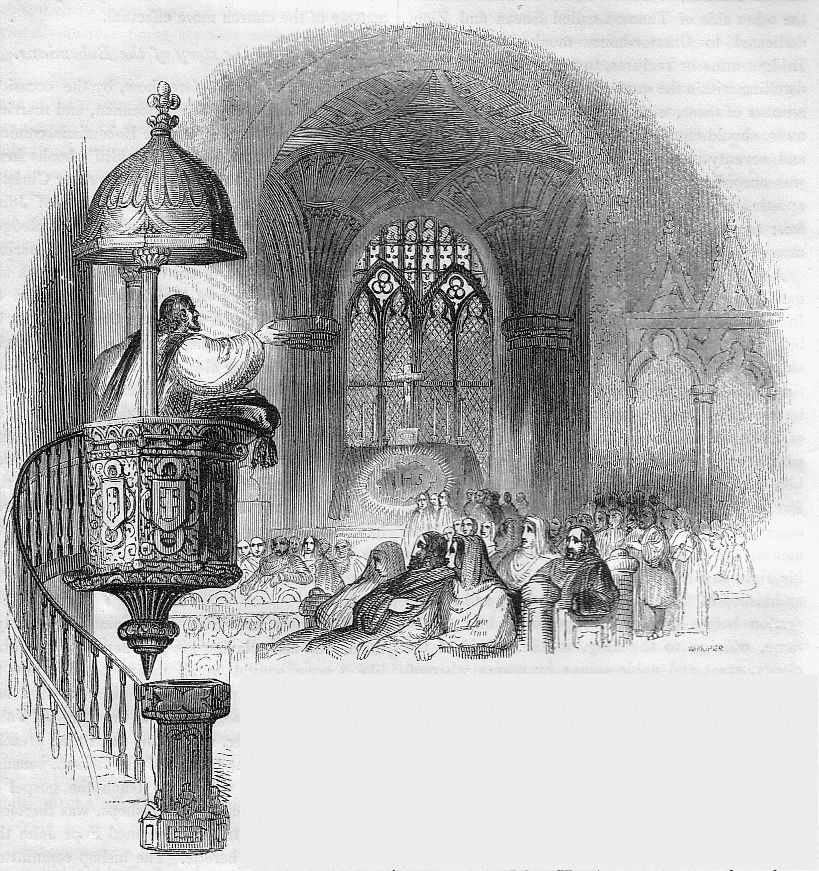 Up to 1405 Huss seemed unconscious of any violent opposition by the church, but by 1408 this pale, thin man in mean attire was being accused by the clergy to the archbishop for using stinging remarks in describing prevalent moral and other abuses among the priests…Possibly one of the greatest reasons for his dissatisfaction was the moral corruption of the clergy. He espoused and preached:

“The rights of the individual’s conscience were to him higher than all church and papal authority.

The selling of indulgences

“Twice during 1411 the papacy issued bulls proclaiming indulgences to all who would supply funds for a campaign against the king of Naples. Hardly had these bulls of indulgences reached Bohemia before Huss attacked the whole corrupt system. His opposition raised such a tumult in Prague that upon the advice of friends he withdrew from the city and went to his native village, where he remained two years to study and write. 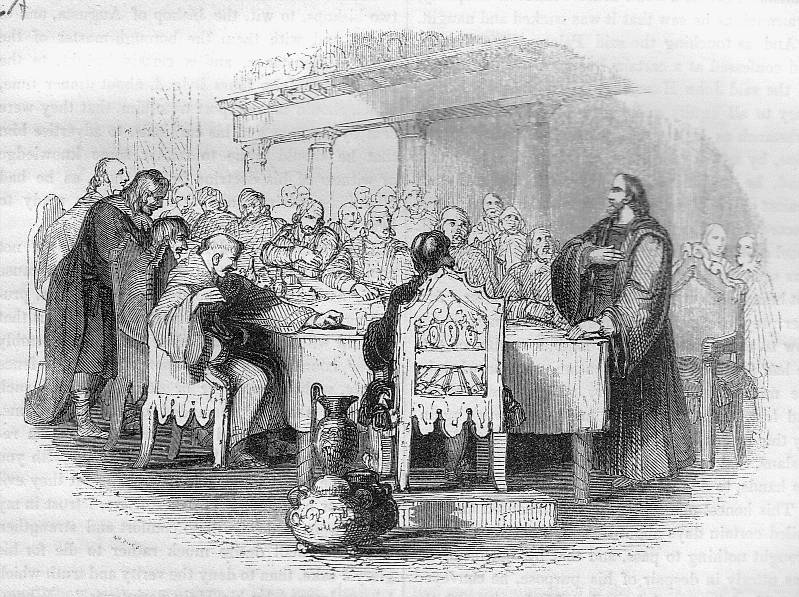 Interdict against the city of Prague

“From this time on all events pointed to an ultimate trial of Huss in which the control of the entire proceedings centered in the hands of the church. News of the Hussite opposition to the indulgences, with a consequent loss of money to the papal treasury, and other anticlerical disturbances, reached Rome and resulted in a summons for Huss to appear there.

“The pope’s first efforts to subdue and silence Huss fell fruitless because Huss had too many influential friends, among whom he counted the queen and many nobles. Consequently, upon the refusal of Huss to respect the papal summons and go to Rome, the city of Prague soon felt the weight of an interdict. This act caused a great deal of disturbance, for to have a city placed under an interdict meant that all religious services were suspended, sacraments were not administered, and burials were halted. In short, an interdict deprived all people of the comforts of religion. It was because of this disturbance, and not because of cowardice, that Huss left the city temporarily upon the advice of his friends. 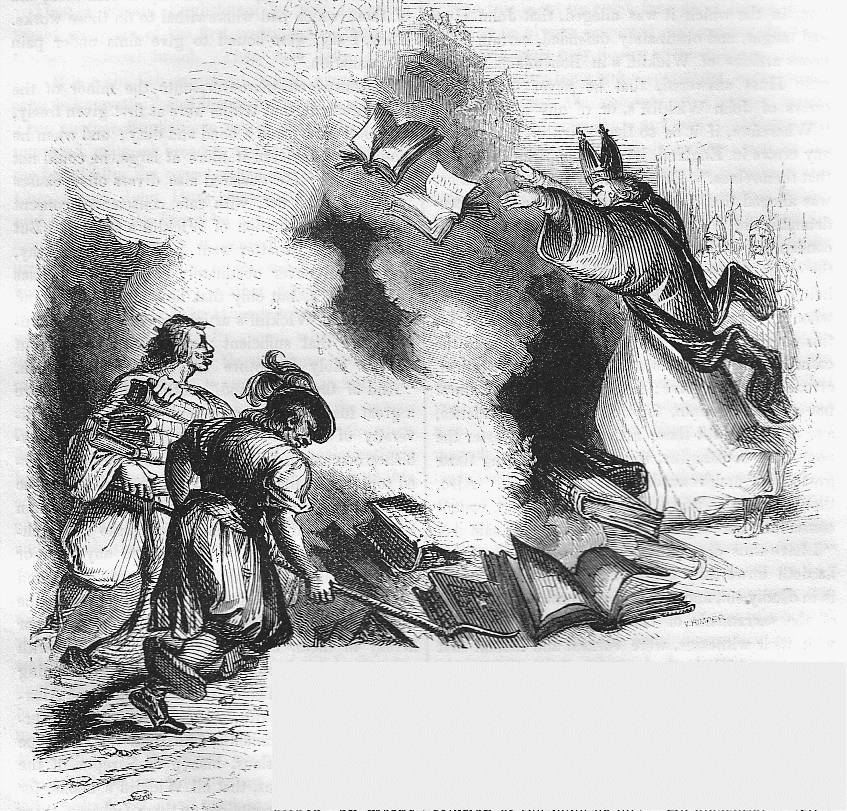 “Huss did not entirely ignore the summons to Rome, but because of ill health he sent three personal representatives. When their efforts proved unsuccessful, Huss was again excommunicated. But upon the receipt of a safe conduct granted by Sigismund, emperor of the Holy Roman Empire, and by the king of Bohemia, Huss, in the company of three nobles and others, started for the Council of Constance in October, 1414, and arrived there November 3. By December 6 Huss was placed under arrest by the joint order of Pope John and the cardinals.

Mistreatment by the Dominicans

“Huss soon found himself in a filthy dungeon in a Dominican convent, where he remained chained day and night with insufficient food. Upon his complaints concerning the condition in the dungeon, he was first transferred for safekeeping to the castle of Gottlieben, and by June, 1415, he was under guard in a local Franciscan convent. His confinement under poor sanitary conditions and improper care brought on an illness which nearly resulted in death. When he finally appeared in the council before the emperor he stood in chains as a common criminal. 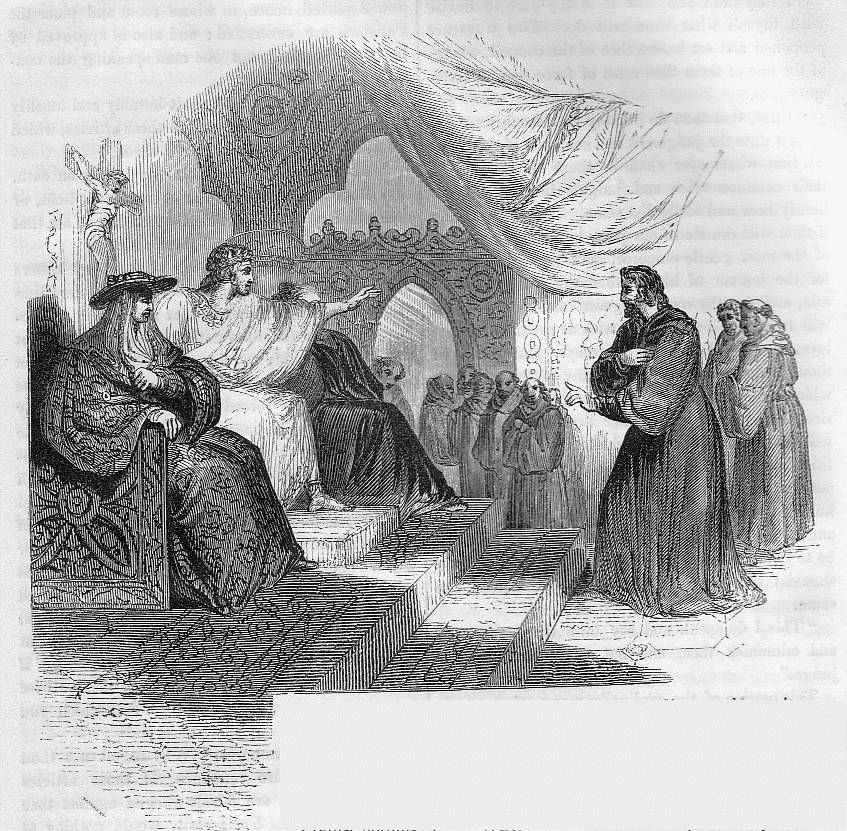 The trial of John Huss

John Huss condemned as a heretic

“It is a widely accepted opinion among scholars that what has been called the trial of Huss was nothing but a mockery and a violation of all principles of justice and honor. At the public hearings of June 5,7,8, 1415, he was repeatedly shouted down when he tried to speak…During the long, tiring days of the hearing, misnamed a trial, Huss consistently upheld the Scriptures as the sole guide for the salvation of sinners…When the news of his conviction reached Bohemia, not less than two hundred fifty lords affixed their seals to a letter addressed to the council requesting leniency for Huss. The letter caused some delay in his execution, but it could not save him.

“Throughout the hearings many witnesses appeared against him, but not one person was permitted to speak in favor of Huss.

“On July 6, 1415…Huss was condemned as a heretic. Then in a prepared ritual Huss was deposed, degraded, commended by the priests to Satan, and delivered to the secular government, which was to carry out the death sentence imposed by the church.

Courage in the face of death

The execution of John Huss

“It was reported that he walked to his death with a steady, firm tread, singing or praying as he went. He showed neither fear nor regret for his actions. When his executioners led him to the stake in a meadow outside the city, huge crowds followed. At the stake he was divested of all clothing except his boots. Chains held him securely to the stake. A mixture of wood and straw was piled around him until it reached his face. While the fire licked around his body he sang and prayed until the flames stilled his voice. After his body had been consumed, his ashes and the soil upon which they lay were gathered and thrown into the Rhine River.

– Taken from Heroes Of The Reformation By Gideon & Hilda Hagstotz, c1951